Considering that I reckon myself to be a keen gardener it is really quite astonishing that I should have forgotten to prune my roses, all 50+ of them, including shrub, bush, climbing, rambling and dog roses. I have made a start and pruned more than half of them over the past few days. I have the holes in my arms to prove it. Roses are pruned twice a year round here, once in autumn to stop the wind rocking and loosening the roots and once in early spring to encourage new growth. Sadly, there were quite a few buds and open flowers left, but I cut them all back ruthlessly. I haven't done so always but that means that the new season's growth is all topsy turvy and wrong. Pity. I do so love the last rose of summer, left blooming all alone, (as Nana Mouskouri used to sing). I often brought the last one into the house at Christmas. 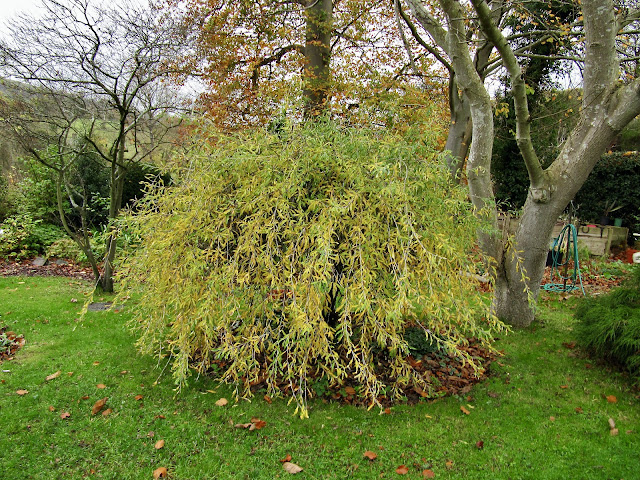 Several of you expressed an interest in what I called my ballerina tree (weeping pear); here it is with the golden leaves of autumn which are silver in spring and summer. The leaves are all off now and the thin silver branches which you can just make out are all that's left.
Enough of gardening.
I have started to go out to one or two of the social clubs again. Admittedly, I have to force myself, particularly now that it's dark by 4pm and often cold and windy and wet. Yes, the rains have come back with a vengeance. Mustn't grumble because the soil really needs it.
People's habits have changed a great deal over the Covid years, I am not the only one who has become a recluse. When I drag myself out I usually enjoy the get togethers, I chat and show an interest with the best of them but, truth be told, there are very few people whose company I have seriously missed. Over the two years I have "lost" two formerly close-ish friends; one hasn't said why and the other believed I had criticised their Covid behaviour. Sad, but I'll get over it. So little touches me deeply nowadays there must be something wrong with me, something I inherited from my Dad, who also rarely felt the need to socialise; strangely, when he did, he was the life and soul of the party. People used to think of him as a jolly good fellow, which he really wasn't. Certainly not as far as company was concerned.
Losing friends for rather trivial reasons means that the friendship wasn't all that solid anyway.
I've had a couple of jobs done round the house and garden. The terrace has been relaid, and a bathroom  has been retiled. So much for moving! I emailed a friend today simply to restart post Covid relations. To my surprise I learned she and her husband want to downsize, they have sold their house and are in the process of getting rid of "stuff" prior to a move closer to family. Here's hoping that their family doesn't up sticks for a new job or something like that. It so often happens. Besides, the couple have many friends round here and will have to start from scratch in their mid 80s. People do the strangest things.
Posted by Friko at 19:27

Labels: A Year in the Life of a Lady Gardener, all the loneley people