I read today that "The Nobel prize in Physiology or Medicine has gone to Sweden's Svante Paabo for his work on human evolution."

Neanderthals and, to a lesser extent Denisovans, have been in scientific news for a year or more. There are fewer finds of Denisovan material, hence less is known about them, although they definitely existed as hominin ancestor of Homo sapiens, the modern humans, i.e. us.

(The first traces of Denisovans were found at Denisova Cave in Siberia in 2010. Fossilized teeth from Denisovans were later discovered in the same cave. Two upper and one lower molar were found in sediments that were dated to between 195,000 and 52,000 years ago)

Ever since I was taken to the cave in the Neander Valley in Germany as a young teenager I have been fascinated with human evolution. It was a study visit arranged by the school. 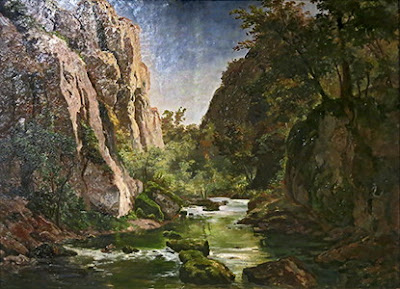 This visit was a long time ago, the whole class was taken on 'retreat', a kind of religious meditation and a rite of passage between childhood and emergence as young women. That my main 'take-away' from this three day outing would be seeding the first doubts in my mind that maybe the theologians at my school were not 100% the font of all wisdom was probably not the intention, although I have to stress that our religious teachers were not creationists. We had science lessons too, physics and chemistry as well as pre-history and history. 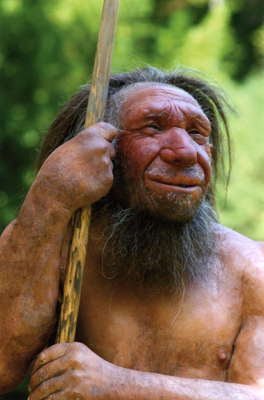 Modern science has advanced in huge leaps since the days in 1856 when the skeleton of homo neanderthalensis *1 was first discovered. The Neander Valley was originally a limestone river canyon with rugged scenery, waterfalls and caves. Large scale quarrying changed the shape of the valley dramatically. During quarrying works the bones of the original Neanderthal man were found in a cave called Kleine Feldhofer Grotte, which is the cave we were taken to on a visit during the retreat; perhaps the school needed to imbue us with scientific zest as well as religious zest. Sadly, neither the cave nor the cliff where the bones were located still exists. Still, perhaps the destruction of the valley was not altogether a bad thing, without the quarrying operations the bones of Neanderthal *1 would not have been discovered. Since then many more traces have been found not only in the Neander Valley but in many other places all over southern, central and eastern Europe, 400 separate Neanderthals so far.
Paleontologists and geneticists have established that Neanderthals lived between 130 000 and 40 000 years ago; they coincided and bred with Homo Sapiens between 2600 and 5400 years ago, before they disappeared as separate hominids. One of the recent discoveries is that between 1 - 4% of modern human DNA comes from our Neanderthal relatives. And it turns out that Homo sapiens bred with Denisovans too: in parts of South East Asia up to 6% of people's DNA is Denisovan.
Fascinating stuff. Perhaps the Neanderthals really were the knuckle dragging, grunting, sub humans that we imagine when we now call certain types of man "neanderthal". It is somewhat unlikely though, because these early relatives of ours left art behind, in the form of cave paintings. They also lived on earth for far longer than Homo sapiens before they finally became extinct. No doubt paleogeneticists will find out much more about them as methods of scientific exploration continue to develop.
As for my visit to the cave in the valley of the Dussel in North Rhine Westphalia I remember only how very disappointed I was. We had been told that we were to be present in a place where the ancestors of early humans had lived and, being an imaginative soul, I envisaged visible and detailed traces, with maybe the odd domestic arrangement preserved for me to marvel over. There was nothing, just a cave in bare rock, without even the obligatory fire pit. They do it so much better in films.
Posted by Friko at 19:31