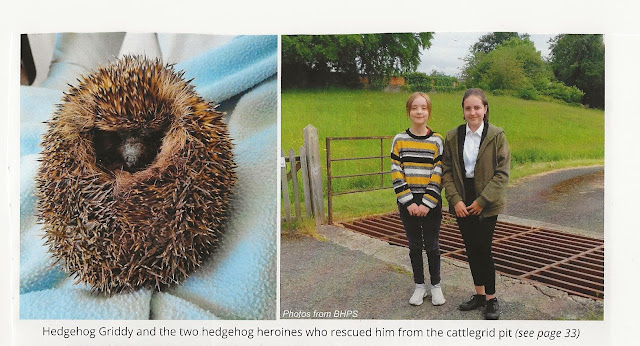 Griddy is a hedgehog which was trapped in my cattle grid and rescued by the two little girls in the photo.
He is not the first one to end up in one of my two cattle grids, I rescued one myself and have since filled in the grid nearest my house along the drive. But Griddy was trapped, the ladder out had rotted and he was very lucky that the girls saw him and had the sense to get in touch with the Hedgehog Preservation Society.
In spite of their ferocious appearance hedgehogs are really quite delicate. Had the girls not rescued him he could have died from hypothermia, dehydration, starvation, or a combination of all three. After 48 hours on a heat pad, warming up and resting, he was eating well and putting on much needed weight before returning to the wild. In the meantime, local craftsmen have installed a new ladder in the cattlegrid. In future there is a way out for any creature that falls into it.
The local representatives of the Hedgehog Preservation Society kept me informed of developments and when Griddy was ready for the great outdoors again, they came to me and asked if I would have him to be released. I was gratified to hear that they could think of no better place for a hedgehog than my garden and the surrounding banks, overgrown with brambles, shrubs, hedges and furnished with piles of wood and plenty of hiding places for such a shy creature. I know he is still here, he leaves me signs in the form of black hedgehog poo, although he has possibly started to furnish himself a winter den for hibernation. The weather is still rather warm and I hope he is eating as many slugs as he can find before he withdraws. Any food I leave out is usually gone in the morning, I sincerely hope it's not the marauding cats who eat it.
Posted by Friko at 21:27