Cheerfulness is Breaking Out ? 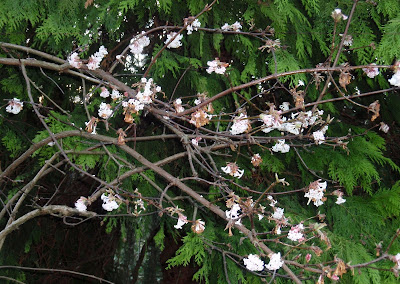 There are one or two reasons to be cheerful after all,  this winter flowering viburnum is one of them, even if the picture is, once again, of very poor quality. I have no idea how I can make photos clearer, as clear and focused as they were with the old Blogger. I am using the same camera and doing nothing different, that could account for it.

Life is more and more circumscribed in the UK, we are in the third lockdown and there’s little hope that we will climb out of the pit any time soon, vaccinations notwithstanding. I am still waiting for mine, but the advice is, that even after having received the vaccine, we are to remain vigilant and as close to home as possible. Staying out of circulation makes for a dull life and there’s little of any interest to blog about. Zoom meetings are a poor substitute for meeting in the flesh.

W.W. (wiry and willing) called today. He promised that we will soon be out in the garden again. There are jobs he can do now, like laying a crazy paving kind of path; all stones have come from the walls of the old castle which have got buried in the garden over the centuries since the castle was razed, and have since been dug up by me and Beloved and old gardener and kept aside for just such a purpose as the one I have in mind. I also want to lower all the hedges which have grown taller than necessary and take far too much light from beds. A job for W.W.’s chainsaw. Snowdrops are out in several places and aconites are just beginning to show their golden heads above last autumn’s leaf fall. More reasons to be cheerful!

I really must go out more, while we had snow and ice I was worried about slipping and breaking something. Hospitals bursting at the seams with Covid patients are not an attractive destination at present. Amazing, how fear concentrates the mind.

I am very fortunate that my son has stepped up to the mark, he rings me once a week, usually on Sundays, for a long chat. I had no idea that he has a well developed interest in politics, we only ever used to ‘just chat’, but now he is my weekly ticket to staying sane and letting off steam about the dire state of the world, in general as well as specifically. While casual meetings with like-minded friends are verboten, I miss a good old session of getting hot under collar. To the rescue comes son; we have an hour or more of serious raving and ranting and, boy, do we have something to rave and rant about! There is no need to go into details, there cannot be a single person anywhere who is not aware of the near tragedy, all of us, in our respective countries, might be facing. Still, as George Orwell said: “A people that elect corrupt politicians, imposters, thieves and traitors are not victims... but accomplices”.

And finally (there has to be an ‘And finally’, as they have on the news, something silly and light, to make you go off with a smile on your face) : very occasionally I have contact with my ex-son-in-law, we might send Christmas emails or birthday wishes, we have remained on good terms through the years. Well, we had a light hearted correspondence during the festivities, nothing much about nothing much. But he ended his message with:

Onwards and upwards, and don’t give up on the blog… much of Shakespeare’s best output was penned during plague!

giving me an unexpected chuckle. Friko and Shakespeare, eh? I didn’t even know that he followed my blog.