Whatever am I going to do about my resident fledgling blackbird? Or maybe blackbirds plural? 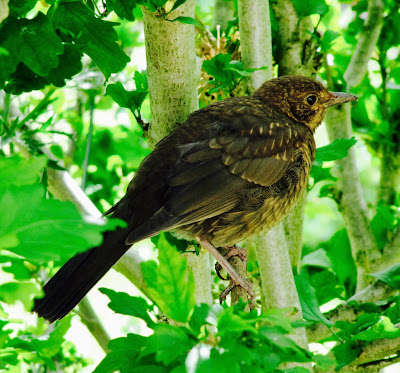 About 8 to 10 days ago I first noticed that there was a very young blackbird hopping around close to the back of the house on the terrace. There is a bowl of fresh water standing there as well as access to various kinds of bird foods, both on the ground and in the air. I know that blackbird fledglings are fed by the parents after they’ve left the nest and, also, that they don’t learn to fly until then. (Google is wonderful - I didn’t know any of that) Their food is grubs, worms, insects, not so much grain or fat balls. Above is the first photo I took, seeing its properly formed tail I thought the youngster would soon be off. 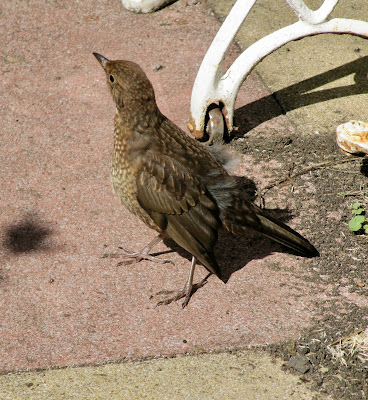 A few days later I took this photo of another young bird. At the time I thought it was the same bird as the first. This one too kept hopping about close to the house and the patch of ground just in front of the back terrace where I have some shrubs and a few herbaceous flowers. 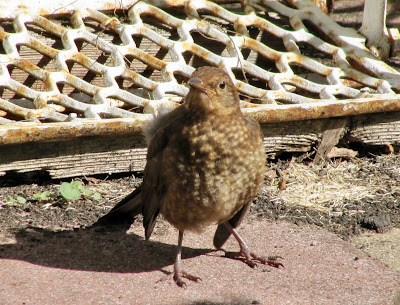 Yet a few days later, maybe 2 or 3, I saw this little chap (or girl - I can’t tell at this age) which seemed to be a bit younger than the other (?) birds, fluffier, downier. All had exactly the same behaviour pattern, they all skulked around in the same very small area, frequently nodding their  head up and down, up and down, appearing to find breathing difficult. After minutes of nodding, they all sneezed and coughed, ending with a soft little chirp. 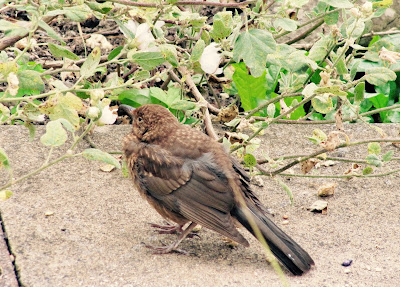 This morning this little chap turned up, again nodding and sneezing and picking at the crumbs I’ve spread on the terrace. Are they all the same bird? Do all blackbird fledglings constantly nod, opening and shutting their beak, and shake their heads and sneeze?

I am obsessed with my lodgers, checking on them first thing in the morning, keeping them close to the house because of marauding cats. Shouldn’t it be flying by now if it’s the same bird? I’ve seen them drink from the water bowl and pick at the crumbs I’ve provided. They hop about quite actively although there are always long breaks in the hopping while they are sitting still, in full view of me and possible predators. The problem is that I haven’t seen the parent birds feed them. That’s not unusual but what with me spending hours watching the fledglings ( from a suitable distance) I’d have thought I’d have caught them at it. Grown up blackbirds are quite tame in my garden, they stay close to my feet and spade, waiting for me to produce worms, when I’m digging the earth.

Oh dear, I am so worried, I want them to fly off and lead happy blackbird lives and sing beautiful songs for me.
o-o-o-o 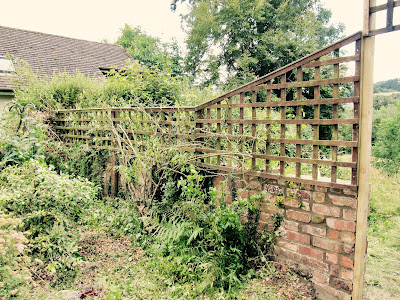 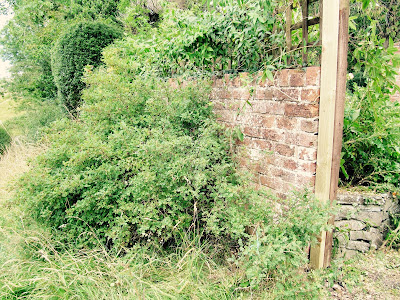 This is the new wall, trellis and door frame, seen from inside and out. A new door has also been installed. Rosie’s trunk is visible again and shows promising new shoots. I shall have to weed round her feet, provide her with a good mulch of compost, some rose feed and a few drinks. Next year she’ll be as good as new, ready to snag and scratch anyone’s hands who tends her without taking the greatest care. In just two sittings I read a most extraordinary book about a woman who escaped her successful London life by moving to the wilds of an island in the Scottish Hebrides. to run a derelict croft. She describes her existence there which, initially an idyll, soon turns into a fierce struggle for survival. She lives the rawest, most pared back life, poverty stricken, ill and lonely, and always facing the hostility of the islanders who resent all incomers. But this is not a misery memoir, it is a triumphant tale of rebirth and renewal, with nature being the driving force.

It is hard to believe that this story is entirely factual, once or twice I said “No” in shocked accents and, of course, of
necessity, it is a wholly one-sided account. But, even if only the half is true, it really is breathtaking. The language too is beautiful, the most lyrical description of nature I have read in a long while.