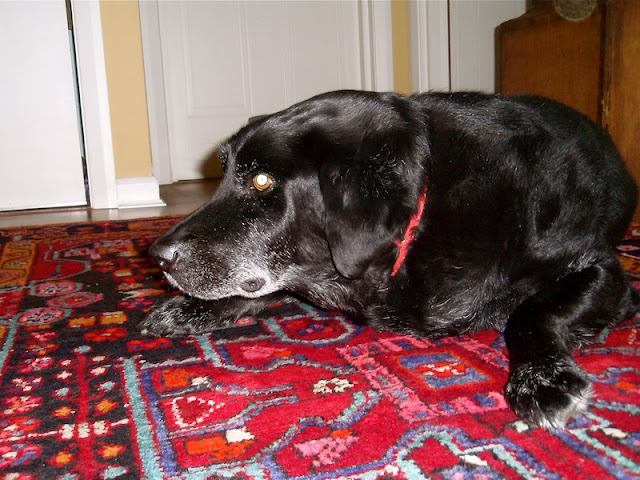 My Benno is getting seriously old. At eleven-and-a-half - the 'half' is very important in a dog's life - he is old for a labrador, and it shows. Summer's heat is doing him no favours, every step, even in the cool of the morning and evening, causes him to pant heavily, deep in his throat, with a harsh, rasping sound. His hind legs are withering with arthritis, and when he forgets that he is old and tries to jump about in greeting or excitement, they give under him, and he falls over. I found him in great trouble yesterday, collapsed on the floor, all four legs sticking out at right angles, unable to get to his feet by his own efforts. I gently arranged his legs so that I could push him over on to his side, from where he eventually managed to get upright again. But he was seriously distressed, issuing soft yelping notes, which broke my heart. We've tried various medications, but nothing seems to make much difference. Apart from that, he appears happy and is terribly keen on his food, like most dogs and certainly all labradors.

The bond between human and dog runs deep. It's around 14,000 years since Stone Age hunters domesticated Canis familiaris - humans have had a long time to perfect their relationship with dogs. Today we say that a dog is man's - and woman's - best friend, a buddy for as long as the animal lives and a great sorrow when that life comes to its end.

Having a dog keeps us young, they are good for blood pressure and waistline. regular daily walks keep owner and dog in trim. Dog owners are always glad to stop and talk to each other, which is good for mental health too, they rarely suffer the unremitting loneliness of the wholly solitary human; forced to go out, they meet other people. Walking a dog is a fail-safe device for an ad hoc, unthreatening approach to strangers. When, as a woman, I'm out in the fields and woods walking a dog, coming across a man on his own in a lonely spot instantly turns from a potential reason for flight-or-fight syndrome to a no-threat, cosy 'hello, nice day' encounter.

There is an unbreakable bond of love, trust and companionship between a dog and its human. In exchange for food, shelter and care, the owner receives lifelong loyalty. Even a dog who is ill-treated is utterly loyal and will protect its owner with every ounce of muscle strength and a full set of snarling teeth. Farmers are known for their lack of sentimentality towards animals - just think of whole flocks of once cute, gambolling little lambs, squeals of piglets and soulful, deep-eyed calves  euphemistically 'going to market' - and they don't always treat their working dogs kindly, but I have yet to see a border collie or gun dog repay its master with disobedience.

Dogs don't run off with a new partner. They don't stab you in the back. They don't turn into surly adolescents or become uncaring, neglectful adult children. They don't argue, they never nag, when they hear your footsteps their tails thump the floor in welcome and they turn ecstatic somersaults the minute you walk in the door, after you've left them on their own for a while. You could say that dogs are creeps, but I prefer not to. They love a cuddle and have an unerring instinct for your state of mind. They will fill any emotional vacuum in your life with trusting eyes and unconditional warmth. Sigmund Freud said  his dog gave him 'affection without ambivalence, the simplicity of a life free from the almost unbearable conflicts of civilisation ... a feeling of intimate affinity, of an undisputed solidarity'. I couldn't have said it better myself :-).

I'm praying for cooler weather and no thunderstorms. Benno fears all loud, unexpected noises, thunderclaps in particular. If there should be some, you can be sure that two elderly humans will be crouching on the floor, huddled protectively over their even more elderly dog, making soothing noises.