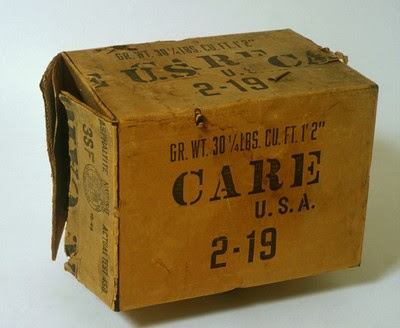 It grieves me to see so many of my American blogging friends unhappy with the politicians in their own country. I see a good, proud, kind nation tearing itself to pieces and would like to remind you of the big heart and generous spirit you showed towards others less fortunate than you.

Let me introduce you to a little girl, called Eva,  growing up in the years immediately after  WW2 in Germany, in a small village on the left bank of the Lower Rhine. Previous adventures can be found under the label 'Eva's Tale' in the side bar. Each story stands on its own. Sometimes Eva writes the story herself, at other times she asks me to do it.

This is one of those that I tell for her; she would like me to say thank you to the people of America, who, irrespective of political affiliation, clubbed together like one nation of like-minded people, with one gigantic heart, willing to help her and millions like her to survive the chaos of her time.

Dear American reader, you may not know what a CARE Paket is, or recognise the letters GARIOA , neither did Eva at the time, but those letters and what they stood for, meant that she, although often hungry, did not starve to death.

Eva went to the village school; she was fortunate in that her school was undamaged, it had a roof and walls and tables and chairs. Like every child, she picked up any kind of firewood she could find on her way to school.  Very occasionally, she had a piece of coal, or a whole briquette to take; without heating, they were in danger of freezing during lessons in winter.

Eva knew about hunger too. Everybody was entitled to ration cards, children included, but you can’t eat paper. There was very little food, with or without a ration card. If you had a garden, you might have had some potatoes or cabbage for part of the year; if you had anything left to barter, you might traipse round farms and maybe come away with a couple of eggs, a pound of potatoes, some apples.

An American Aid Programme made it possible that children had hot milk soup at school, semolina soup, barley soup, or oat soup. Eva’s favourites were chocolate soup and semolina soup with raisins. Each child had to bring a metal canteen with a lid and a handle, to receive a ladle full of liquid.  Sometimes they had a thick slice of bread, with cream cheese. 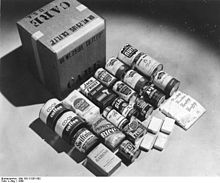 Food aid for families came in the form of CARE packages. In November 45, twenty two charitable organizations in the US founded the private Aid Organisation CARE (Cooperative for American Remittances to Europe). To begin with, most parcels were sent to relatives of American citizens in Germany; once help was standardized, other families also received food.

Distribution was strictly controlled, and Eva’s family never had a full parcel to themselves but it was possible to receive some of the items on ration cards.

For years Eva believed that her favourite food in all the world was horse meat. The reason was that one of the tins her mother opened contained a luscious, dark brown meat, in a thick, savoury jelly. Once the contents had been emptied on to a plate, Eva put as much of her little hand inside the tin as she could, wiping it clean. Licking the traces of jelly off her hand was bliss. 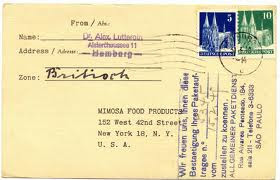 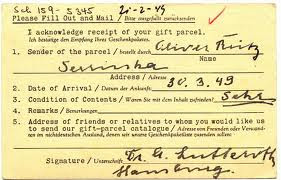 Pre-Printed Thank You Cards which recipients
of CARE packages sent to the United States.