Would Raving and Ranting Help? 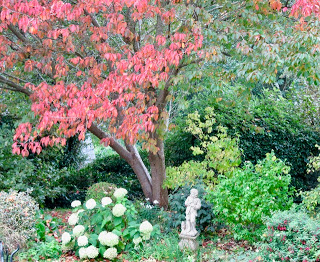 The ancient Greeks had a word for it, they called it HUBRIS, closely followed by NEMESIS. I can’t say that I was surprised when the long-expected news broke. Contrary to the reaction from some (only some) parts of the international media I am also not going into hypocritical overdrive. Does anyone think he is going to learn from this? Probably not. Our pound shop version said at first that he now knew the score, but it looks like he has long forgotten it again. 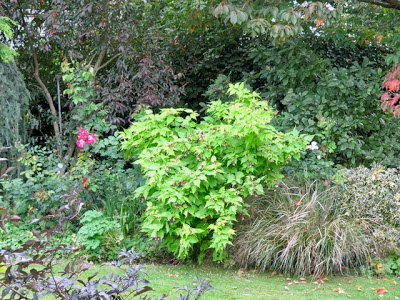 So, it’s autumn now. At first I didn’t want to believe it, I carried on digging and forking and pulling up, but then it started to rain. And rain. The days drew in markedly and there’s a definite chill in the air. In spite of the rotten quality of the photos (oh, damn Google, will they ever get it right?) you can see the difference in colouring.

I am staying in bed much longer in the mornings and going to bed ever later in the evenings. Some days I will have a nap in the afternoon. The weekend was dismal, I didn’t see a soul. Whatever am I going to do with myself for a whole dark winter? The PM  has warned us all that it will probably go on until Christmas and beyond. After feeling no serious ill effects during spring and summer I believe winter will be a whole different kettle-of-fish. Enough already! While the weather is awful I read, and read, and read. A book a day is nothing, sometimes I finish one and start another within hours.

I feel like constantly moaning and complaining, except that fulminating without letup is so tiring! Do you know what I mean when I say I mutter curses under my breath, slam around in the house, find fault with everything and everyone? The other day I got cross when collecting medication from the surgery. They’d left out my lifesaver COPD inhaler and I had to go back to claim it. “We had to wait for it to be delivered”, said the woman at the window. Not a bit of it, I don’t believe it; at other times somebody would have made a note on the packet telling me so.

There’s something else which annoys me every time I open a new packet of pills: they stick sticky tape over the ends now. Both ends.You fumble and fumble to get this tiny bit of tape off, if you succeed the bit of tape then sticks to your fingers and you stand over the open kitchen bin trying to get it off and deposit it inside. Of course, it won’t come off, it’s too small and too sticky. You have to go and find a piece of dry kitchen roll and transfer the remaining fraction of tape from your finger to the paper. You could, of course, just cut through the tape while it’s still attached to the pill packet but what do you do with that? Plastic sticky tape is not meant to be recycled.

Oh, dear saints in heaven, life is getting ever more complicated. And Google definitely isn’t helping. Getting these two mean and fuzzy photos on took ages. Grrrr!