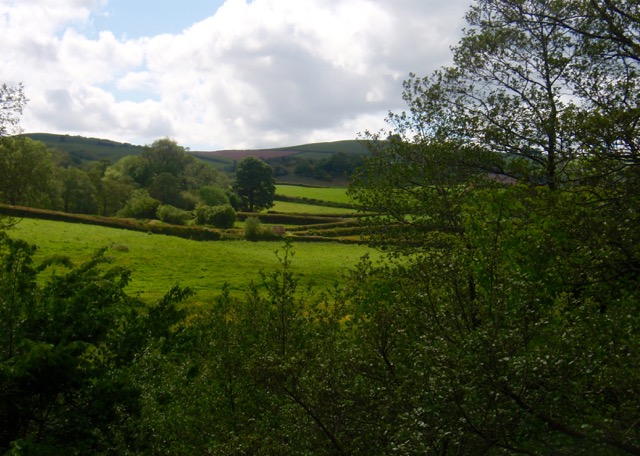 taken from the bailey looking up the valley

K. has been a neighbour for several years. We meet walking our dogs, K. has a lovely collie called Sam; Millie can take or leave Sam, but she adores K. She and I were halfway up the hill when she spotted K. below us in the meadow by the river and down she raced to make a fuss of him and have him make a fuss of her.

K. is a strange chap, lives on his own, is extremely hard up and spends most of his time - up to 8 hours a day - making wood carvings with a religious theme. He is self taught and tells me he has never sold a piece. Beloved and I knew that he suffers from depression, we have had long talks with him (I have given him wood for his fire from the garden and once or twice I’ve paid him to look after Millie; he terminated the arrangement, not me. I’d have been happy to employ him as an occasional dog sitter), these talks have been on the doorstep, his or ours, and in the field, never in the house before.

When he saw me on the hillside he climbed up, Sam and Millie following.

After a desultory exchange about the weather and “haven't seen you around for a while and how are you?” K. laughed his strangely strangled laugh and said he would love to find himself a partner. “Oh yes?”, I said. “Yes, but all the single women in Valley’s End are lesbians; “. He continued, "I was thinking what a nice woman J. is but then Hen told me that J. is a lesbian. Hen is a lesbian, Trish is a lesbian, Jane is a lesbian . . . . ."

It’s true, considering the size of Valley’s End, we have perhaps a disproportionately high number  of lesbian and gay neighbours. Safety in numbers? Although that is surely hardly necessary nowadays. Maybe I’m a bit slow on the uptake but I didn’t consider being a lesbian (or gay man, for that matter) any kind of bar to making friends.

“Yes, but I don’t want a friend, I want a partner.” K. continued, “but then I’m probably asking too much anyway.” He began to count off on his fingers the qualities he required in a woman. “She’s got to be a good cook, she’s got to like opera, she needs to be into art, she needs to be able to put up with me. . . . “

“Aha,” I said, not being particularly tactful, “and what can you offer in return?”

K. choked. “Sweet eff. all”, he said. I’m no good at anything, haven’t a penny to my name, and I certainly wouldn’t want to put up with me.”

I suggested he might like to try and make friends first and to that end I invited him to “come on, come with me and have a cup of tea; we’ll wake Beloved from his afternoon nap and chat.” K. was very keen instantly, and I’d had enough of standing on a windy hillside by that time.

Like many lonely and solitary people K. turned out to be a great talker. After he’d admitted that he wished they’d lessen with the years, we dropped the subject of his amorous needs, and he suddenly quoted the beginning of T S Eliot’s Ash Wednesday

and from there it was but a short step to a discussion of singing and music, (K. has had training as an opera singer), poetry in general and T S Eliot in particular, drama, the arts, etc.

“There,” I said, “you have a lot to offer, even if you have no money. In a place like Valley’s End you find many people with tastes similar to yours. What about joining a choir, for a start? Or a drama group?” I wasn’t quite ready to invite him to join our poetry group.

“No, I couldn’t”, he said. “I have been told that I have an excellent voice - (true, he is a powerful baritone) - I wouldn’t really fit in with any local choirs or drama groups. Besides, they wouldn’t want me.”

And then the flood gates opened. “I don’t fit in anywhere.” He quoted Philip Larkin’s ’This Be The Verse’ which starts


They fuck you up, your mum and dad. / They may not mean to, but they do. / They fill you with the faults they had / And add some extra, just for you.

K. is 61 years old and still chewing over the hurts and grievances of childhood and youth, still craving the love he believes he didn’t get as a child.  It is the common story, self-destructive and a barrier to living a full, independent life.

His background is totally uncultured, his parents and siblings are working class people with no pretensions to being anything else, content with their lot. They haven’t read a poem or a book in all their lives. He left as soon as he could for London and education. He did college courses in various subjects, trained as a singer, earning a precarious living in his spare time. “But I couldn’t finish any of the courses,” he said, “ I even did half a Masters in arboriculture. But I ended up in an office, which I hated. I absolutely hated it.” K. began to drink. And carried on drinking for years. He finally hit absolute rock bottom, which is when he ‘was saved’, found religion of a sort and joined AA . He seemed still amazed at what he found there. He said “There were all these people, drunks like me, but they were sober now and jolly, clean and smartly dressed, with jobs and a purpose in life; they didn’t need drink to get them through the day anymore.”

He talked for over an hour, occasionally close to tears. The main impression I had, and still have, is that he needs to find a reason for his years of self destruction and he finds this reason not within himself but in others, his family and circumstances.  In other words, he blames others. He appears to be totally lacking in self confidence at the same time as having unrealistic schemes of making his carvings count for something in the art world by approaching religious bodies, incl. the Vatican.

If only K. could learn the truth of Robert Burns' famous lines which say that wealth, or lack of it, and social class should not be the measure of a man’s true worth.

If he gave himself half a chance K. could be that Man.