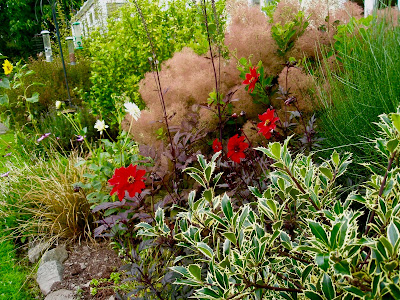 Fully autumn soon, the nights are drawing in, there’s a chill in the air and the leaves of the Japanese ornamental cherry show just the faintest tinge of burgundy. Millie is still with me, she seems to be having a reprieve in her general health - not the arthritis, alas - and I have decided to shut the back door at night. It keeps the warmth in and she has a more comfortable time of it in the scullery. If I have to clean up after her, so be it. It won’t be forever. And it doesn’t happen every night either.

The hedge cutters are here, another sign of autumn. Raindrops are dripping on them but they are hardy young men; “it’s only water”  said the one I took round the perimeter of the garden to give instructions on what needed trimming. True, but I myself still sheltered under a big umbrella. And I needed his arm to help me over a very steep slippery grassy bit without falling over. He promptly fell over himself, should have asked me for my arm in return. 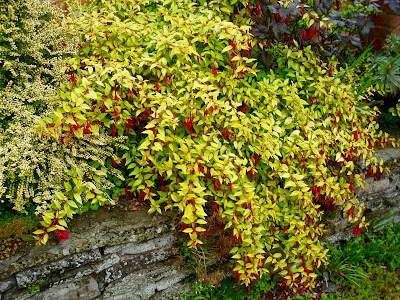 There is so little that is pleasant in this world at the moment that I am seriously keen not to add to the misery for myself. Yes, I am still obsessed with current affairs, yes, I still shout curses at politicians whenever they appear on TV spouting barefaced lies, yes, I still dread what is happening to our climate and the environment. What to do? Withdraw from the whole unholy mess of it? Could be. Escape at least occasionally. Evenings start earlier, earlier evenings require indoor activities rather than balmy nights spent outdoors. Reading, TV and maybe closer attention to this blog of mine again, after several years of neglect.

Which brings me to another question: are you old enough to indulge in bad taste books, films, TV shows without embarrassment? To my surprise quite a few of the ‘ladies who lunch’ admit to doing so. Well, in that case, so do I. Not exclusively, of course. I couldn’t possibly live on a diet of sweets and chocolates, burgers and ready meals, neither can I feed my brain exclusively on pap. However, a Georgette Heyer Regency romance, a cosy mystery from the 'Golden Era', a Mary Stewart adventure, a Robin Hobb fantasy, even a Scandi noir thriller insinuate themselves on to my Kindle now and then. (I am too embarrassed to put hard copies on bookshelves). All of the foregoing have one thing in common, they all end happily-ever-after. As for TV, well, the ladies admit to switching on certain channels which run endless repeats of British and American sitcoms, British country village thrillers and long running soaps. I have to be very tired before I give ‘Midsomer Murders' another go - it’s too much like painting-by-numbers - but it’s been known to fill the odd otherwise sadly depressing space. Morse, Endeavour and Shetland are more to my taste. I can take Agatha Christie's Miss Marple or Poirot as well, if needed. I am not so good on films, but a romcom would hit the spot nicely too.

So, there you have it, Friko’s image as culturally high-brow is shattered. I always knew it and now that escapism has become ever more urgent I am old enough to blow a raspberry at anyone who feels judgement coming on. Not you, obviously.

For those who like natural history and the science of it here’s a recommendation which is neither pap nor instant escapism: Peter Wohlleben’s ’The Hidden Life of Trees’, an informative study and fascinating look into the enchantment of trees that can talk and sometimes walk - no it’s not a fairy tale. You’ll gain a whole new perspective on the amazing processes of life, death and regeneration of woodlands. The better sort of escapism.