All Is Only Transitory


I was looking for a quote to express what I want to say today; there are many, of many words, whole passages, to say just this one thing: nothing lasts for ever. So I gave Goethe pride of place, for he expressed my thoughts in just these four words.

For days on end I have been out in the garden, morning and late afternoon, whenever the temperature allowed. In the middle afternoon I had siesta, sitting reading or snoozing indoors. So gardening is much on my mind. Particularly one aspect of it made me turn philosophical. I don’t know what made me think that gardening is a pursuit which follows the same lines forever, you’d think I should know by now, after close on thirty years of it. Having more or less ignored my garden for the past three years I was greatly surprised when I noticed that many of my special shrubs and whole hosts of perennials look much the worse for wear this year. A bit worn, a bit elderly, a bit tired. Indeed, some look like they need urgent resuscitation.

Of course they do. Highly bred creatures never last as long as your ordinary mongrel, in plant language: your weeds and common versions. Species remain true to themselves, anything bred from them, sub-species and fancy varieties, give up after a few years. So my surprise is rather surprising.

What I need to do now is ruthlessly expel all shrubs past their best, perennials ditto, particularly the kind that flop all over the place and need careful (and boring) staking or those that have turned into congested clumps which barely flower now. A bit of redesigning is in order. 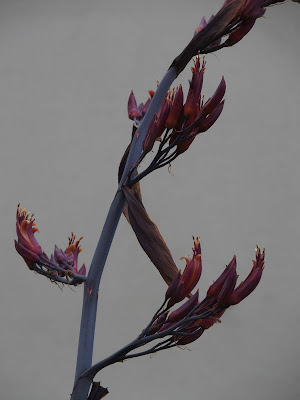 That might be fun. Costly fun even. It would need purchasing new plants and shrubs and involve quite a bit of digging and rearranging.

Which brings me to Paul. We seem to have settled into a relaxed working relationship. When he came yesterday I asked after his well-being, as I always do. He asks after mine too, by the way.

“Not so good today”, he said, “I’m a bit unwell”. He rubbed his chest although I don’t think that was where the source of his discomfort lay.

I made suitable noises and suggested he might want to leave after two hours’ work, before it got hot. “We’ll see”, he said. “I didn’t want to let you down, so I thought I’d better come”.

Two hours in and I asked him if he wanted to continue. “Oh yes”, he said, “work takes your mind off things”.

Later we sat on the bench in Beloved’s memorial patch and had tea, it’s the only really shady spot in the garden any time of day. (How cross Beloved would be, he loved the sun above everything and sat in it for hours, whereas I avoid it when I can. So I win.)

Paul and I got to talking about work. “I don’t really have a choice,” he said, "I need to keep my income up which is stretched perilously thin anyway”. He told me he has only four regulars and a few now and then-ners but he couldn’t really do much more because of his health problems. At the moment he gives me a regular slot on Mondays and an additional slot on another day if he has a gap.

"Thank you”, I said, “but then I’m not such a bad employer?” He turned his head as if I had surprised him and looked me full in the face, not something he does often. “Oh I think we rub along tolerably well.” he said.

For now it’s all good but I’d better not count my chickens just yet.

I added the picture of the phormium in bloom because I still can’t quite believe that is has flowered. Positively pre-historic!